Birch Aquarium teamed up with the Digital Media Lab at UC San Diego’s Geisel Library to create what is believed to be the first 3-D-printed brace for a sea turtle’s shell.

The Loggerhead Sea Turtle was rescued from a New Jersey power plant in 2013 with a large gap in the bottom right part of her shell. This gap, along with an abnormal curve of her spine and paralysis of her back flippers, is likely due to trauma experienced in the wild before she was rescued.

When she arrived at Birch Aquarium in 2014, the juvenile Loggerhead Sea Turtle weighed just 74.5 pounds. She has since thrived, gaining more than 130 pounds.

“That growth has really exacerbated her condition. Without our intervention, the sea turtle could have gastro-intestinal and urogenital systems complications,” said Jenn Nero Moffatt, senior director of animal care, science and conservation for the aquarium. “We teamed up with the Digital Media Lab at Geisel Library to create a brace that will prevent the shell from curving further downward and will promote more normal growth. It’s our goal to prevent further complications and keep her as healthy and happy as possible.”

The juvenile female Loggerhead Sea Turtle was CT scanned at UC San Diego’s Thornton Hospital two  times since her arrival to monitor the changes in her shell. Using a combination of the CT scans and their own 3-D scanning techniques, the team was able to design and fit a brace that is a perfect fit to her shell, so it will not encumber the sea turtle.

“It's amazing that our library can now provide these kinds of services. 3-D technology is getting so powerful and accessible, the possibilities seem endless,” said Scott McAvoy, Digital Media Lab manager and manager at the UC San Diego Library.

The brace is made of a rigid white plastic that was 3-D printed to fit the turtle’s shell precisely.  There is a ratcheting plastic cable that attaches to two fasteners to provide strength, support and pressure as needed to allow flexibility as she grows.  A velcro neoprene weight pocket is also attached, separately, to help provide neutral buoyancy while she rests. All of the equipment used was adhered with a safe, two-part marine epoxy.  The sea turtle, which could grow to as much as 250 pounds —  will eventually outgrow the  brace and have to be fit for a new one.

“This is truly an ocean rehabilitation success story,” said Moffatt. “As a member of the AZA, Birch Aquarium is committed to conserving, rehabilitating and protecting  animals in threat of extinction.  It’s exciting that we are able to use technology in this unique way so our Loggerhead Sea Turtle can continue her role as ambassador for ocean conservation, greeting more than 450,000 visitors each year.” 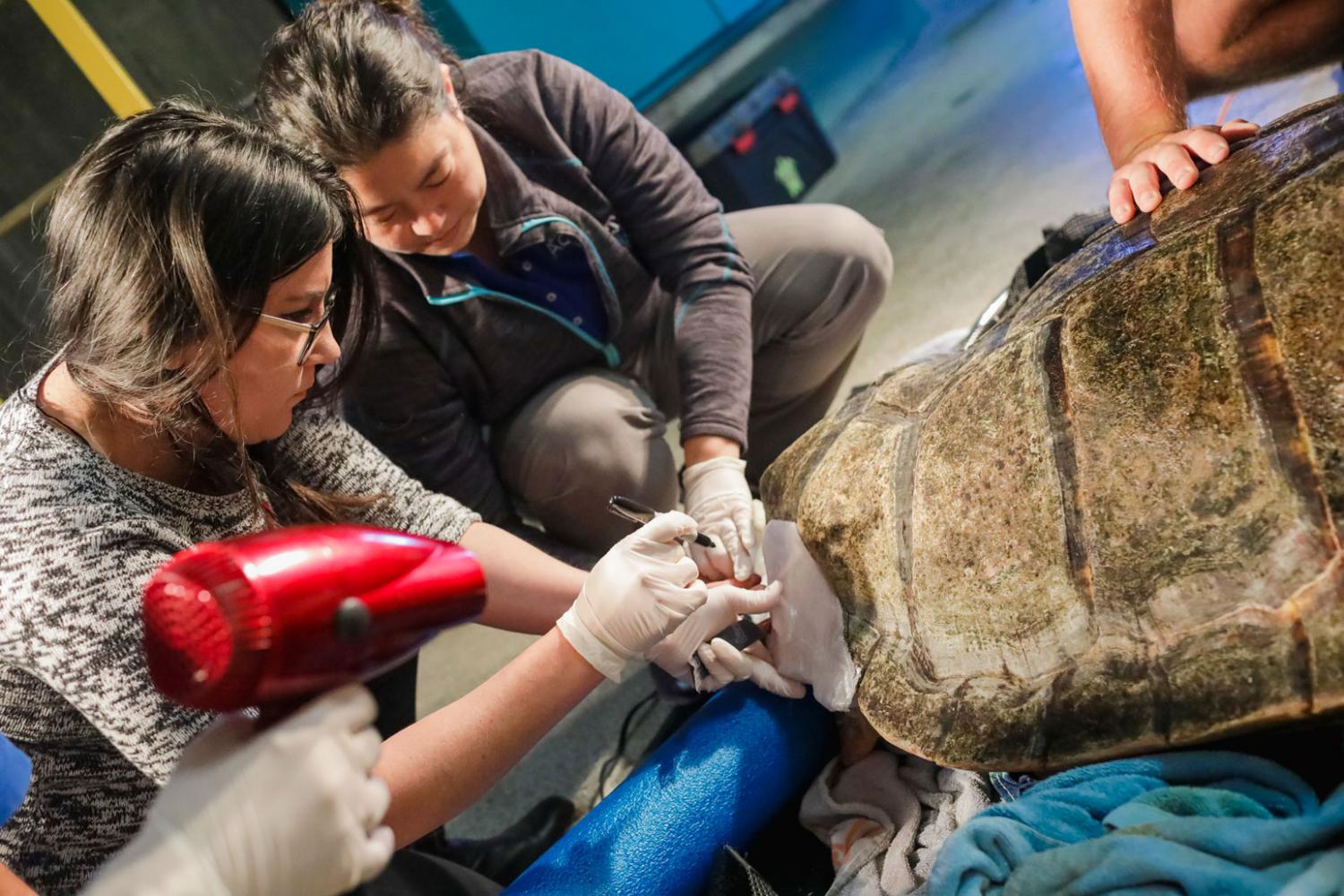