As whale watching season continues, we’ve been lucky enough to witness some spectacular dolphins. Many species of dolphins live off the San Diego coast, the most energetic of which are common dolphins. These dolphins are a cosmopolitan species, found in tropical and temperate waters around the world.

We usually see two types of common dolphins: the short-beaked and long-beaked. They were considered to be the same species until the mid 1990s when genetic tests and careful observation proved otherwise. The two species appear similar, but upon close inspection differences  are visible in their features, size, and coloration (and as their nomenclature suggests, beak length). Short-beaked common dolphins prefer the deeper, colder waters offshore, whereas their long-beaked counterparts stay closer to shore.

Sometimes common dolphins ignore our boat, especially if they are fishing or traveling fast. Other times, our encounters are simply spectacular. We recently witnessed the largest group of common dolphins our naturalists and captain had ever seen, estimated to be at least 2,000 animals. A naturalist joked that the ocean was like “dolphin popcorn” with individuals leaping from the water in all directions, some well over 15 feet into the air. We were so preoccupied with the dolphins that we nearly missed four southbound gray whale stragglers in the distance. These vivacious dolphins are in stark contrast to the elusive Risso’s dolphins, which are more closely related to the largest dolphin of all, the orca. Risso’s belong to the “blackfish” family, which includes orcas, pilot whales, false killer whales, and melon headed whales. They are large dolphins – up to 13 feet long and 1,000 pounds in weight.  Risso’s are born dark grey and their body gets lighter as they age. Mature Risso’s may be completely white and covered with scars from other dolphins, and their primary food, squid. They appear almost ghostlike swimming below the surface of the water. An interesting fact about Risso’s is that they have no teeth in their upper jaw. Instead, they use four-to-14 peg-like teeth in their lower jaw to catch prey. Their tall, curved dorsal fins and flat face are also different from their dolphin cousins. With Risso’s, we get a few brief looks before they dive deep and disappear. 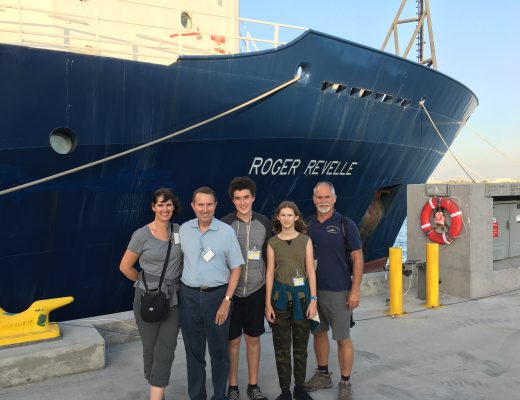 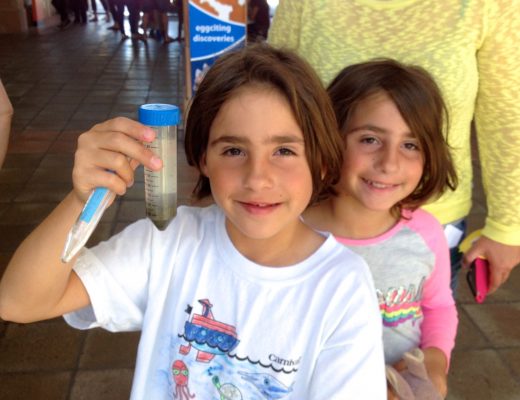