Birch Aquarium is more than a collection of amazing creatures, we also work hard, in partnership with other Association of Zoos and Aquariums (AZA) institutions, to educate about and protect endangered and threatened species. Here is an animal spotlight on four of our threatened and endangered species around the aquarium. We can’t wait to share them with you again once we are able to reopen our doors to the public.

Our two-story, 70,000 gallon Giant Kelp Forest, holds our largest animal, our adult Giant Balck Sea Bass. Giant Black Sea Bass are iconic fish of the Southern California Kelp forest. They can live up to 60 years and are one of the top predators in our local waters. The population of Giant Sea Bass — which is listed as critically endangered by the International Union for Conservation of Nature (IUCN)— is believed to be only about 500 individuals.

Unfortunately, in the 1920s and 30s, there were no restrictions in place to prevent overfishing of the species. People thought that the ocean was an inexhaustible resource and did not understand they were taking too many fish like the Giant Black Sea Bass. Commercial catch peaked in 1932 and their population declined dramatically in both California and Mexican waters. Before a law was passed to protect Giant Sea Bass, the fishery shrunk by 95%. Luckily, legislation was passed in 1988 and is still in force today that prohibits commercial or recreational fishing for Giant Sea Bass. If accidentally caught, they must be released. In 1990 use of gill nets near the California coast decreased the bycatch of these fish.

The numbers are slowly increasing and we are proud to display this magnificent fish within our aquarium. 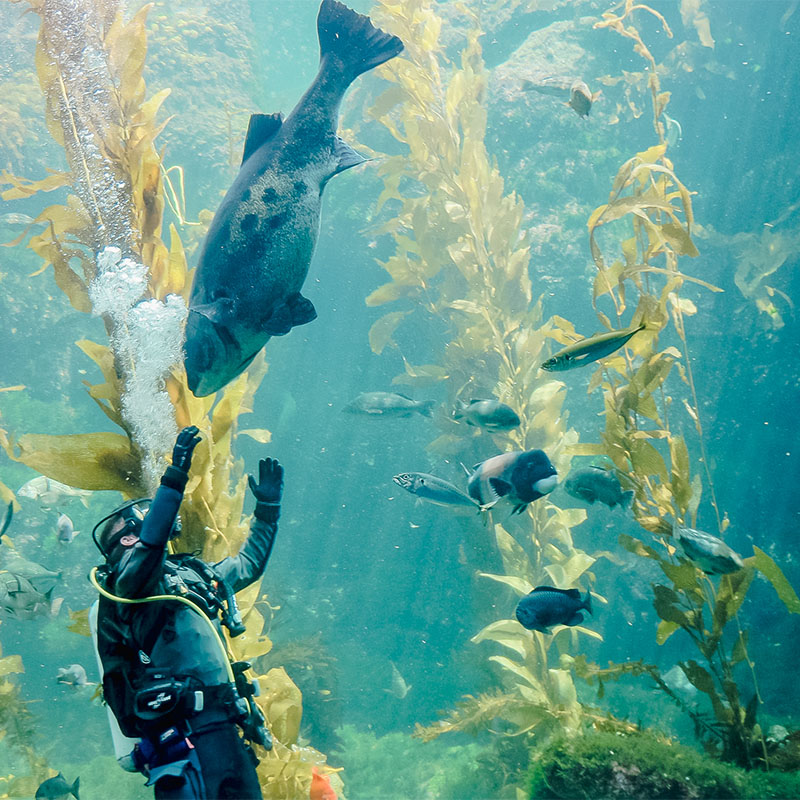 In 2016, NOAA Fisheries listed the Banggai Cardinalfish as threatened under the Endangered Species Act. These fishes have an incredibly unique look and have been threatened by harvest for the ornamental live reef trade and habitat destruction. 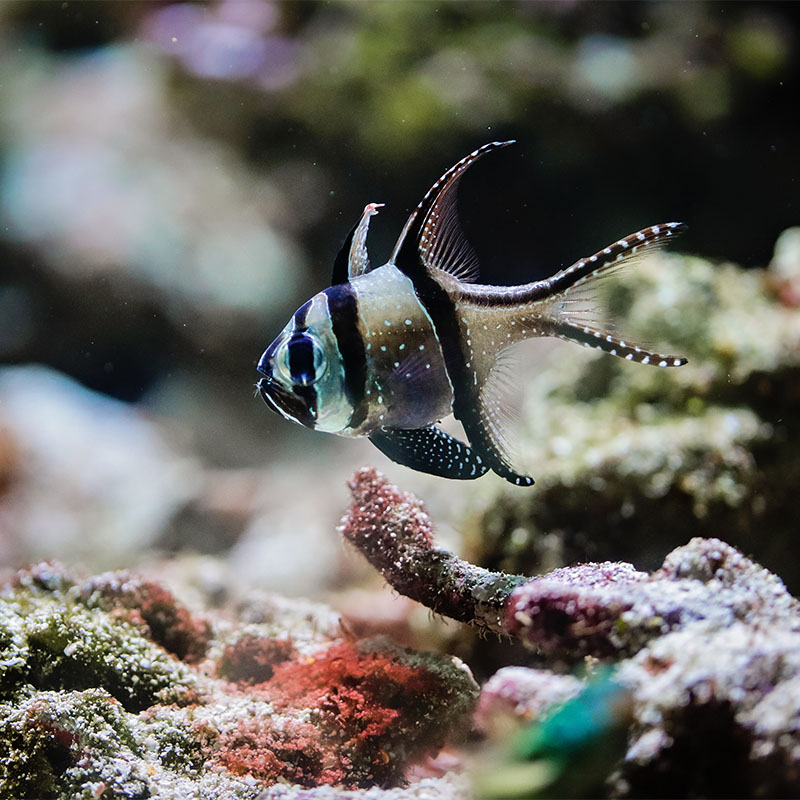 Our Loggerhead Sea Turtle provides not only a unique story but also a reminder for conservation efforts. Loggerhead Sea Turtles face their greatest threats through loss of nesting habitats due to coastal development, predation of nests, and human disturbances (such as coastal lighting and housing developments). Sea turtle hatchlings instinctually crawl towards the brightest light once they emerge from their nest. Historically this was always the reflection of the moon and stars off of the ocean waves, but coastal development and artificial lighting confuses the newborn turtles and the crawl towards the land instead of the sea.

Other major threats include accidental capture during longline fishing, shrimp trawling, and pollution. Accidental capture in fisheries is thought to have played a significant role in the recent population declines observed for the loggerhead.

We hope that guests are able to forge a personal connection with our Loggerhead Sea Turtle and be inspired by her story of survival. 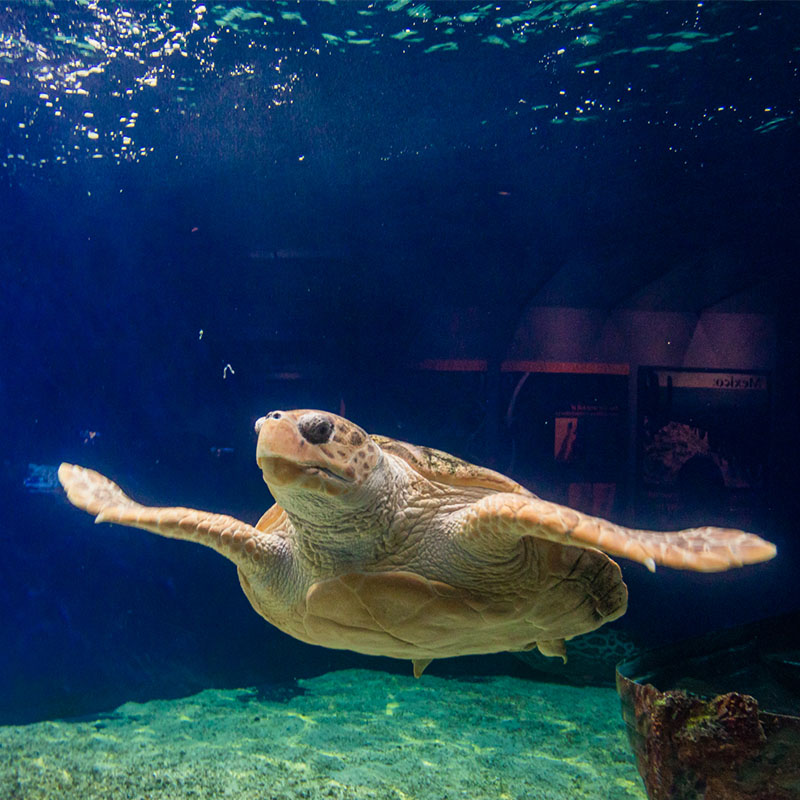 Lined Seahorses are distinctive creatures that are a guest favorite. These specialized fish are poor swimmers and rely on their coloring and texture to camouflage themselves among coral, seagrass, or mangroves where they ambush much smaller prey by sucking them into their toothless snouts. They choose a mate for a season or a lifetime, have complex courting and bonding rituals, and the male carries the embryos to term in his brood pouch.

Lined Seahorses, specifically have been listed by the World Conservation Union (IUCN) as “Vulnerable” due primarily to indirect evidence that numbers are continuing to decline. Most concerning, other seahorse species we breed at the aquarium, like H. reidi have been listed as near threatened and H. whitei have been listed as endangered. This is partly due to trade for ornamental display, use for traditional Chinese medicine, habitat degradation due to coastal development and marine pollution. 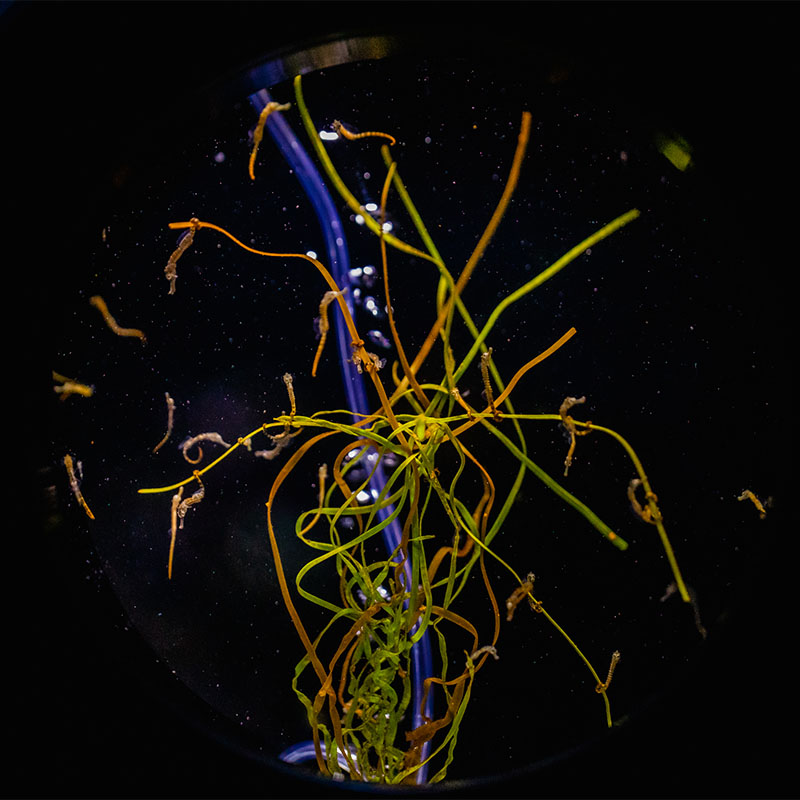 We are honored to have these beautiful creatures on display at Birch Aquarium and hope that by sharing their story, it will inspire the next generation of ocean advocates.