Learn How to Become a Scientist

Learn How to Become a Scientist

How do I become a Scientist?

This is a question we often hear at Birch Aquarium. We are dedicated to inspiring future scientists in all fields, not just marine biology. At Scripps Institution of Oceanography, researchers work in a wide range of scientific fields to understand and protect the planet!

How do I become a Marine Biologist?

Biology and Marine Biology are large and diverse fields. Questions about these careers often have a broad range of answers. For instance, I'm often asked whether Marine Biologists SCUBA dive often. Well, that depends on the type of research they are conducting. If a scientist is studying populations of fish around a coral reef, then she/he would probably dive frequently. If the scientist were examining the chemical properties of a certain toxin, then he/she might spend a lot of time in a laboratory.

What classes should you take to become a marine biologist?

Of course, lots of Biology; but you will also need a basic understanding of science in general (e.g. Chemistry and Physics) and mathematics (at least up to Calculus). Computer, technical/electrical, and typing skills would also be helpful.

What special attributes are necessary to be a successful scientist?

You have to be a curious and independent thinker. A scientist does not accept a conclusion until he/she has enough evidence to exclude all other possibilities. A scientist also has to be clever and creative so that she/he can dream up experiments to answer her/his questions. Additionally, a scientist must be a "go-getter." If scientists conduct their own research, they cannot wait around passively for somebody to tell them what to do. They have to take initiative.

What are some good undergraduate schools for Marine Biology?

There are many excellent schools for biology in the United States and other countries. I feel that the most important primer for a career in Marine Biology is to get as much research experience as is possible. It is important for you to attend an undergraduate institution that is near a "hot spot" in Marine Biology so that you can volunteer to work with prominent scientists.

What is the average number of hours per workday?

As an academically employed researcher, the hours are highly variable. Research science is more of a lifestyle than a job. Researchers have certain goals that they would like to reach by certain dates, but most do not have specific hours which they must work. Some work from 9 to 5. Most spend a few late nights or weekend days in the lab each week. The scientists I know work about 40-50 hours. Of course, the hours are longer when one is just starting out (e.g. graduate school).

How many years in college are needed to become a Marine Biologist?

Lots. If you want to be a research scientist and direct YOUR OWN research, a PhD is almost required. I hated school when I was younger, but now I enjoy it. I would strongly suggest not worrying about long-term commitments beyond your bachelor's degree until your junior year of college. A lot can happen between now and then, and you may be a very different person.

Does being a Marine Biologist include being a teacher also?

If you work for an academic institution, you will probably be required to teach. Some institutions want their scientists to concentrate on research and require very little teaching (one class per year). Others would like a reputation as a teaching institution and ask their scientists to do mostly teaching. There may be some which require no research. I believe that both research AND teaching are necessary fuel for a good scientist.

Now for the tricky part... If you have assimilated what I've told you about being a good research scientist, then you will not accept my advice without scrutiny. These are the opinions of only one scientist. Do your own research.

As a final word of advice, I saw a sign the other day which read: There are three kinds of people in this world: 1. Those who make things happen 2. Those who watch things happen 3. Those who wonder what happened. Join the first group, if you are not already a member. Treat your life like you own it (because you do). 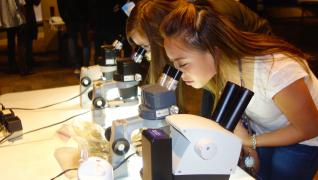