If you’ve ever been snorkeling or diving in Southern California waters, chances are you’ve caught a glimpse of a Garibaldi! These bright orange fish are hard to miss, even if you aren’t in the water —  on a clear day you can spot their distinctive coloring through the water from atop a boat or surfboard.

Garibaldi undergo quite a transformation as they grow up! Young Garibaldi (also called juveniles) start off bright orange like adults — but they set themselves apart with distinctive blue markings. Youngsters are decked-out with a single large blue splotch on their upper-back and speckled all-over with shiny blue spots! As they cruise through the water, light reflects off these markings to give them a shimmery appearance – even their fins are lined with blue!

Once young Garibaldi are larger than two-inches, they’ve entered a new stage in their life — the teenage years! These older juveniles don’t just undergo a growth spurt — their coloration continues to change too. Older juveniles lose the large spot on their back and no longer have blue markings along their fins — but their blue speckles remain! Once these “teens” are longer than 6 inches —  the length of a toothbrush — they’ve entered adulthood.

The coloration of adult Garibaldi is most likely what you picture if you’ve seen one before. Adults no longer have blue spots and are orange all over! Their bright color may seem more typical of a tropical fish, but Garibaldi are found off the coast of California — from Monterey all the way down to Magdalena Bay, Baja, Mexico!

Adult male Garibaldi are highly territorial and they know exactly where their territory starts and stops. Once a male secures his territory — it’s time to find someone to share it with! To attract a mate, males must woo females by building them a nest! Female Garibaldi know what they want — they seek out well-kept nests to lay their eggs in — so males work around-the-clock to keep their nesting territory in perfect shape! If an adult male enters another’s territory, the resident Garibaldi will drive it away — they will ward off  other animals and even people if they think they are a threat! 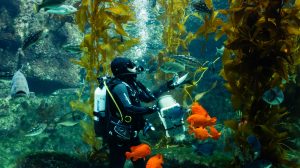 You might be wondering … what does this have to do with spots? Those blue spots on young Garibaldi aren’t just decorative — they signify to adults that they’re not a threat! Younger Garibaldi aren’t mature enough to reproduce, so youngsters are  free to swim into an adult’s territory. But once they lose those blue spots, they’ll have to find their own spot in the sea.

Be sure to find the Garibaldi (or two or three) during your next visit to the aquarium. You can find several bright orange adults cruising around our Giant Kelp Forest habitat or check-out the blue-spotted juveniles in the Southern California habitats in Hall of Fishes.