This whale watching season has been a successful one, with guests and crew onboard the Marietta seeing Gray Whales, Common Dolphins, Pacific White-Sided dolphins, Risso’s dolphins, and even Humpback Whales and unusual Pilot Whales! All of the Birch Aquarium whale watching naturalists spend hours and hours on the water looking for magnificent creatures, and we can’t help but be a little superstitious at times.

I find myself developing my own superstitions (they’re more like routines) I follow in order to ensure it’ll be a successful whale watching day. My personal superstitions are: wearing a specific pair of whale socks and drinking ginger tea will bring good luck. These make me feel prepared and like I have done all I can to set the day up for success. I am not the only seagoing person to develop little superstitions like that, in fact, maritime superstitions have been prevalent for millennia!

Some superstitions have lost their relevance, but some have withstood the test of time and still have influence today. I have come across three common maritime superstitions in particular recently– read up on the following superstitions to prepare for your next time whale watching! 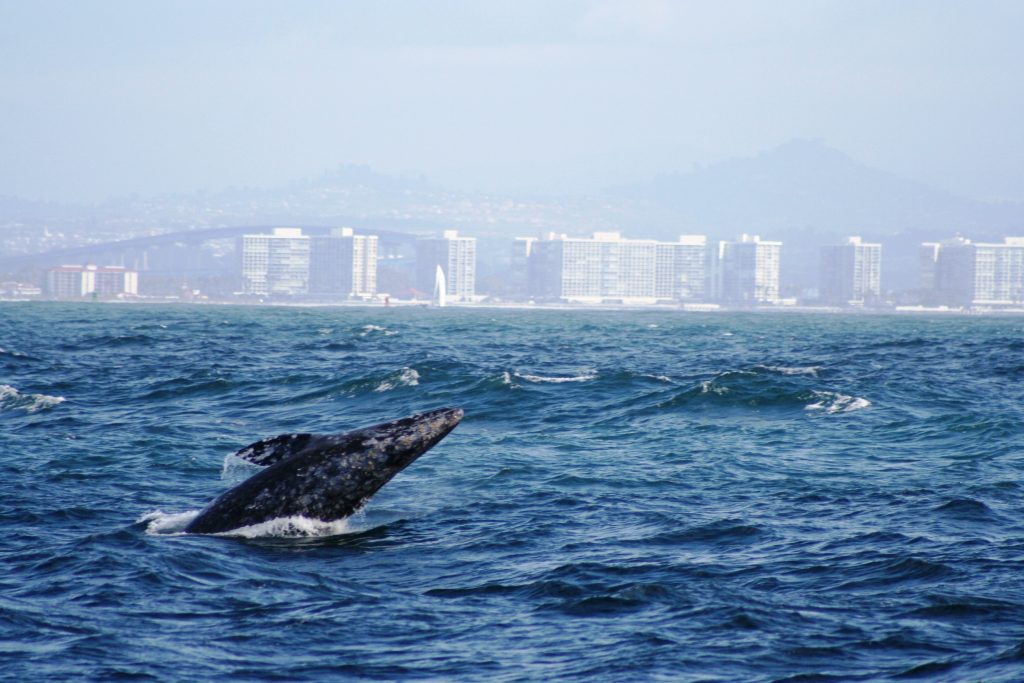 I started to whistle while looking for whales one afternoon, and Captain Dan told me, “uh-oh, whistle in the wheelhouse, whistle up a storm!” This was the first time I had heard that superstition. When I asked around if people knew why that was a superstition, I was told that it has been around for many, many years, and whistling could cause or call over a storm because whistling could be interpreted as challenging the wind. Note to self: no whistling on the boat.

Weather is very important to any seagoing adventure, so it makes sense that another common superstition that kept being mentioned was, “Red sky in the morning, sailor take warning. Red sky at night, sailor’s delight.” The red in the sky depending on the time of day would indicate if sailing would be good or bad. After doing some research of my own, I found that this saying originated in England and does have some merit. In England, weather conditions come from the ocean to the west, so if the air is clear, the sky will be tinted red at sunset; in the morning, red light is reflected by clouds to the west, which meant there was moisture in the air and the possibility of bad weather. Note to self: check the sky the evening before and morning of going out to sea.

The most common superstition I’ve heard (and have accidentally been guilty of) is that it’s bad luck to bring bananas on the boat. This is probably also the strangest superstition I’ve heard in addition to it having the greatest variety of origin stories. One explanation is that bananas ripen very fast, so fishermen who had them on their boats would have to return to land quicker than normal. As a result, they’d lose time for fishing, catch less fish. The second explanation is that fishermen would bring bananas back to home to use for trade if they had a bad fishing trip. As a result, when the wives of the fishermen would see the fishing boats returned with bananas, they knew there was little to no fish, so they began to associate bananas with bad luck. The final explanation I’ve heard is that a type of banana spider would stow away among the bananas on boats and would bite sailors, causing them to die. Note to self: no bananas on the boat.

So there you have it, the three most common maritime superstitions I have come across while on the water. There are many superstitions to prevent bad luck, but there are also some to bring good luck, including stepping aboard using your right foot, and when dolphins swim with the boat (this happens so often on our trips, by the way).

Join us for more whale watching adventures to see amazing animals, but remember, no whistling, check the skies, and no bananas!