More than Seadragons – Other Charismatic Creatures in Our New Exhibition

As amazing as seadragons and seahorses are, we thought it would only be fair to also highlight the other fascinating creatures in our brand new Seadragons and Seahorses exhibition. Check out these beautiful, and sometimes bizarre, creatures. 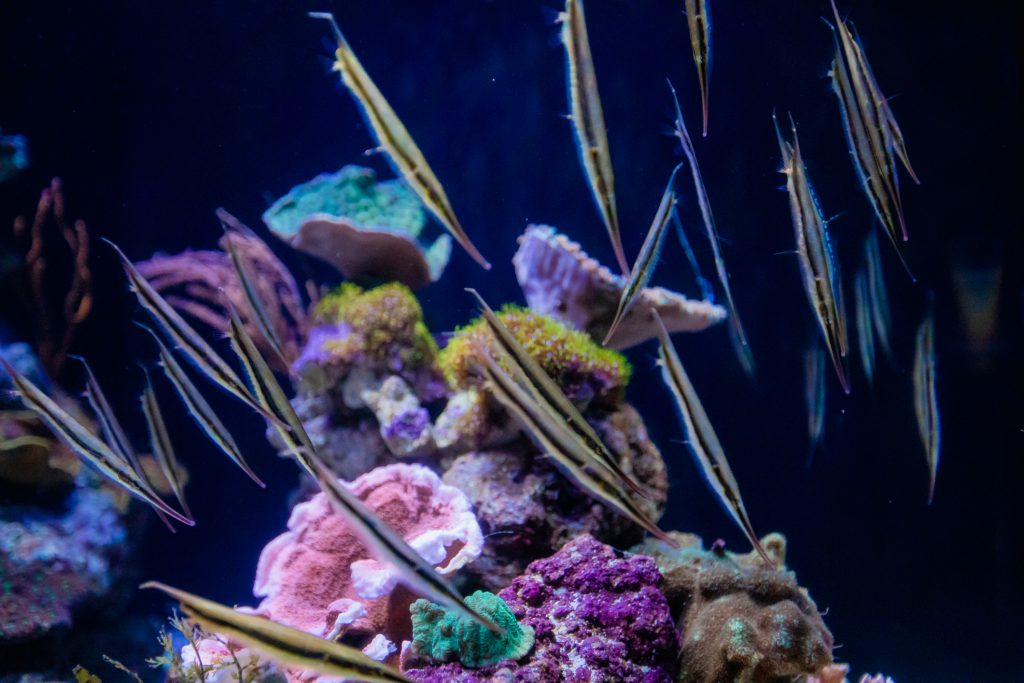 If you’ve stopped by the exhibit, you’ve seen the Shrimpfish! They are hard to miss as they seem to dance around the corals. Shrimpfish are related to seahorses and seadragons and are found in relatively shallow tropical parts of the Indo-Pacific. They look nearly transparent and are practically flat from side to side with long snouts and sharp-edged bellies. Shrimpfish, often seen swimming in a synchronized manner, uniquely adopted a head-down tail-up position as an adaptation for hiding among sea urchin spines.  Their dorsal surface is covered by protective bony plates.

If you happen to catch a feeding, be sure to look closely at the Shrimpfish’s mouth. Their elongated mouth is like a clear tube and you can see them suck food up as if they were using a straw. 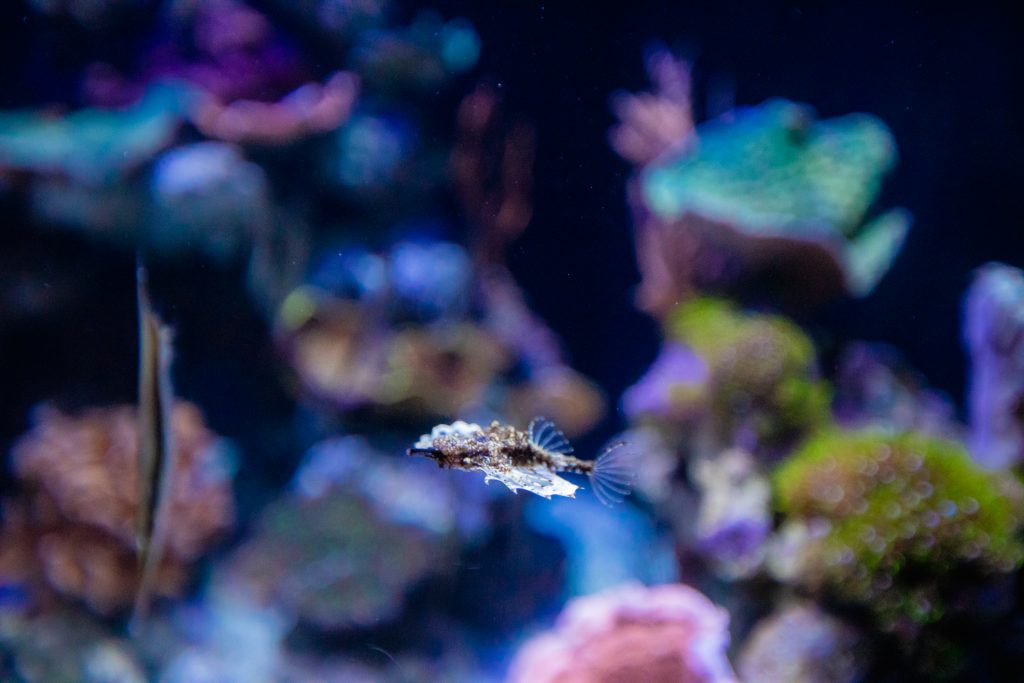 Seamoths have got to be my personal favorite and were my inspiration for this post! These funky, understated creatures are most notable for their unusual appearance, including flattened bodies, the presence of large, wing-like pectoral fins, a long snout, and a body encased in thick, bony plates. They are often found in monogamous pairs. Their unique body shape allows them to quickly scuttle across sandy or rubbly seafloor to suck eggs, worms, copepods, isopods and other tiny invertebrates into their snouts.

Most interesting of all? Instead of scales, these seahorse cousins’ bodies are sheathed with bony plates that they molt every week or so to rid themselves of parasites. This rather Medieval exoskeleton has earned them another common name: dragonfish. 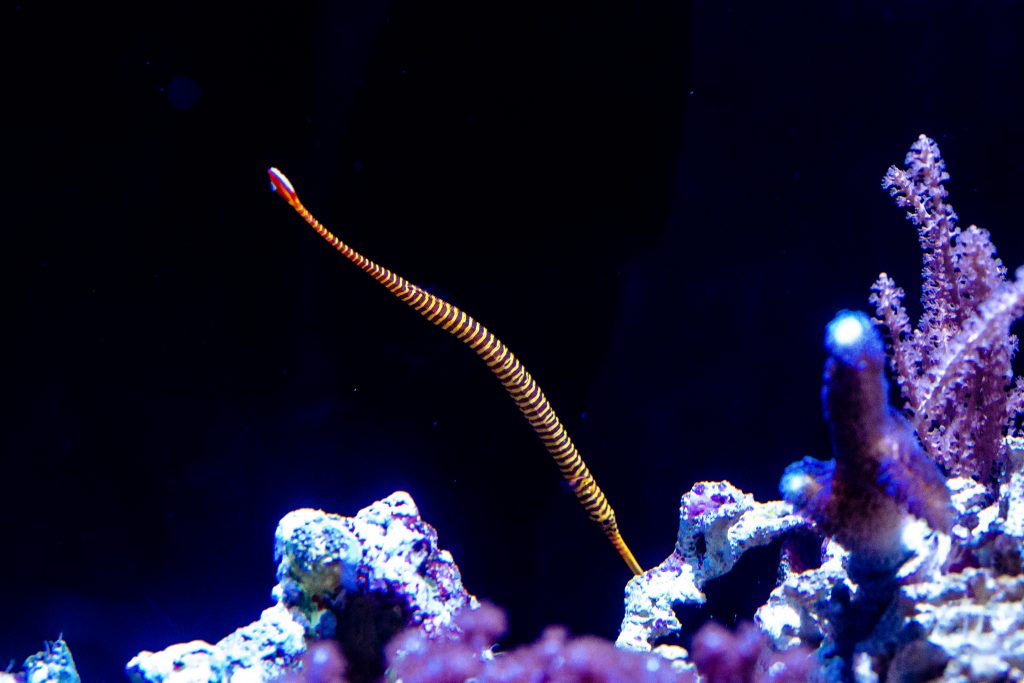 Pipefish are unique because they are like an elongated seahorse and come in diverse shapes, sizes, and colors. The the Yellow-Mulitibanded Pipefish above have amazing disruptive coloration and warning colors. Disruptive coloration is a form of camouflage that works by breaking up the outlines of an animal with a strongly contrasting pattern (the military uses this as well!). Warning colors are usually bright reds, yellows, or oranges that tell predators to stay away. Pipefish have a long, thin, and snake-like body that have evolved to a highly modified skeleton with an armored plating. Pipefish do not have pouches like seahorses, instead the males protect the eggs on a special place along their tails, similarly to seadragons.

There are currently five different types of pipefish in Seadragons & Seahorses – try to spot them all! 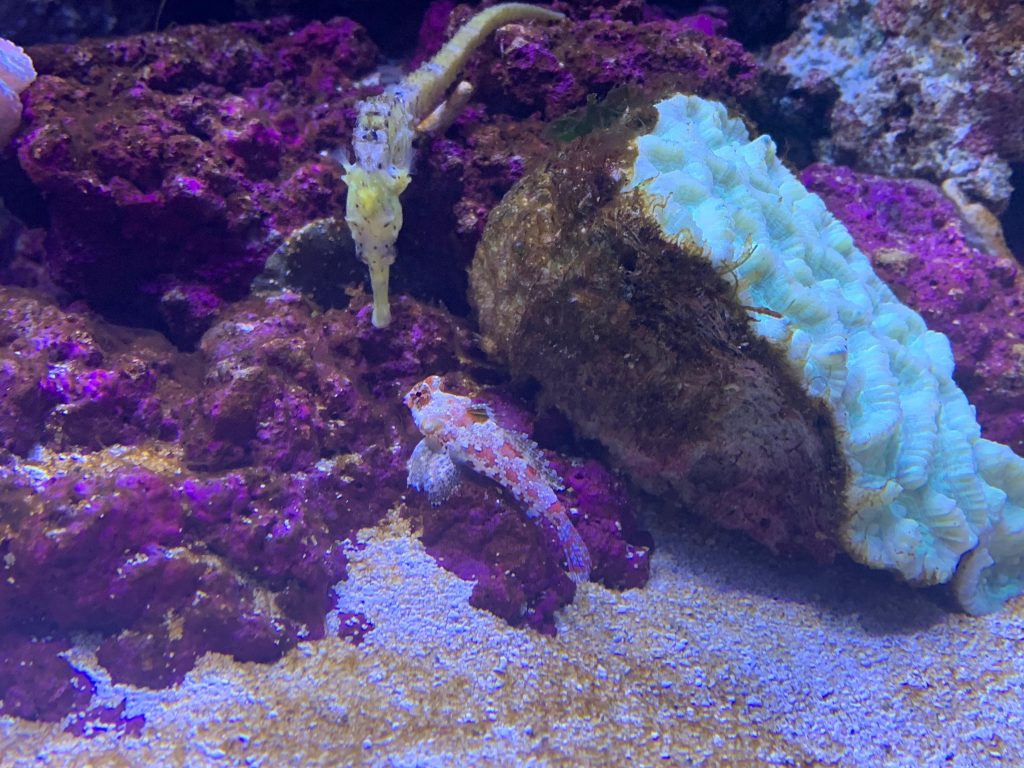 Can you spot the Scooter Blenny below the seahorse?

The Scooter Blenny is also known as Scooter Dragonet or Ocellated Dragonet. They are a small fish with a rather large head and large ventral fins that it uses to perch on rocks as it moves around. Its eyes are mounted on top of the head busily looking around, and its mouth is small and pointed. It has a mottled brown and white body with red highlights. They usually live in coral reefs alongside the bottom and hide in rocky crevices. The Scooter Blenny often sift through the sand for food.

There are red and sandy-brown colored Scooter Blennys currently on exhibit. Have you seen both types?

Stop by the aquarium soon to catch these creatures in action! 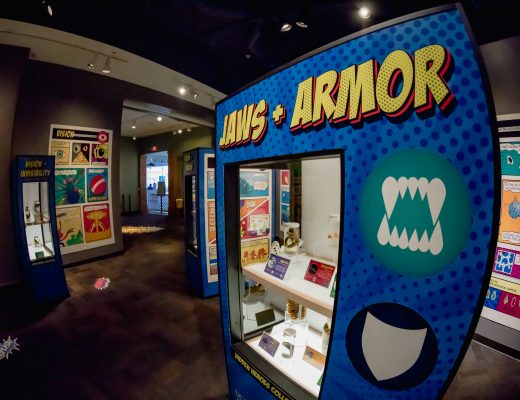 Getting Ready for Oddities!