This Mother’s Day we’re shining the spotlight on two of our ocean’s most hardworking moms — Gray Whales and Leopard Sharks! Have you ever spotted these marine moms off the coast of San Diego? 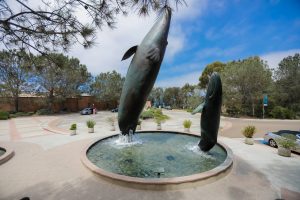 Gray Whale moms go the extra mile for their babies … literally. These marine moms perform one of the longest annual migrations of any mammal  —  they travel over 10,000 miles in one trip — this is over ten times the length of California!

Gray Whales begin their voyage in the Arctic where they gather to feed on the high amounts of small crustaceans present in the nutrient-rich waters. Starting her journey with a seafood feast is extremely important  — she’s eating for two of course! After a summer of feasting, they begin their journey south and swim all along the California coast until they reach the warm lagoons of Baja, California, Mexico. This is the perfect location for moms to give birth due to the warm water and sheltered bays.

Once a baby Gray Whale — also called a calf — is born, a mother’s work is far from over. Soon after she’s given birth she already has her first task … getting her baby to the surface. Despite living in the ocean, whales are mammals therefore they need to breathe air. Using her powerful fluke and fin muscles, a mother gray whale will swim her newborn up to the surface so it can take its first few breaths of air.

The next feat for a mother Gray Whale is feeding her newborn. This might sound relatively simple but newborn babies typically weigh between 1,500 and 2,000 pounds! Since whales are mammals, the calves nurse on their mother’s milk. Calves typically drink about 50 gallons of milk every day and nurse for 6-8 months! That’s a total of over 300 gallons of milk a mother has to produce!

Finally, whale moms must look-out for their babies as they make the trek back up the coast to their Arctic feeding grounds. As they swim up the coast, mothers and calves stay extremely close so that predators — like Orcas and Great White Sharks — are intimidated by the large size of the mother and leave her baby alone.

Be sure to keep an eye out for these migrating moms and their babies during the fall and summer months along the California coast. You can also get an idea for just how giant Gray Whales and their babies are by checking out the Gray Whale sculpture in front of Birch Aquarium! 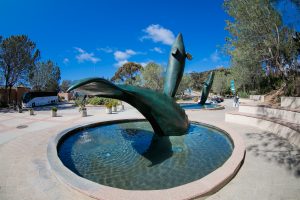 Meet another local La Jolla mom! Leopard Shark moms are acting in the best interest of their babies long before they are born.

During the summer, Leopard Sharks gather in warm, shallow waters. They are especially abundant in bays, estuaries, and other coastal areas — including our own La Jolla Shores — and the majority are actually pregnant females. But why is that the case? Well … warmer temperatures in the shallows are key for a successful pregnancy! Scientists at Scripps are still working to understand all the different benefits but think warm temperatures may enable the unborn sharks to grow larger and mature more quickly.

Like any good parent, Leopard Sharks are always looking out for the safety of their babies. All shark species lay eggs, but Leopard Sharks do things a little differently. Leopard Sharks produce eggs but keep them inside their bodies until they hatch — giving birth to live young. This reproductive strategy is known as ovovivipary and ensures that no predators find the eggs before they’ve had a chance to hatch.

If you’re spending time on the beach here in La Jolla during the summer and fall you’re highly likely to see some of these shark mothers for yourself! Large groups of female Leopard Sharks congregate in the shallow waters at the far left end of La Jolla Shores beach — in an area referred to as the Marine Room. You can also see Leopard Sharks swimming around the Giant Kelp Forest habitat in Hall of Fishes or check them out in Shark Shores. 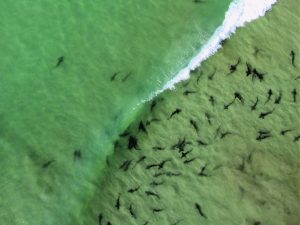 birch aquarium at scrippsconservationgraywhalesleopardsharkmarinemomsscripps institution of oceanographySharkswhales
By Wave Moretto