Listening for Fish Conversations in the Kelp Forest

Guests visiting Birch Aquarium the last week of February 2018 may have noticed something different in the Giant Kelp Forest exhibit. Birch Aquarium helped Scripps Institution of Oceanography at UC San Diego test a new ocean conservation tool used to identify sound-producing fish. This research equipment will be deployed in the ocean to gain a better understanding of wild kelp forest habitats and the noises within.

From February 26 to March 2, the acoustic-camera system continuously recorded sounds and time-lapse video of the creatures in the Giant Kelp Forest exhibit. Scripps scientists will analyze the recordings to understand the unique sounds different species of fish create. They will compare fish calls made in the exhibit to those recorded in the wild, allowing them to interpret which fish are “chatting” in the kelp forest. They will also update a catalogue of fish sounds for species that live in our local kelp forests. 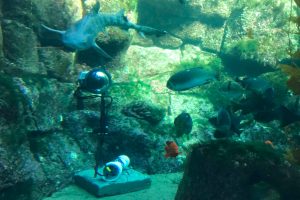 The acoustic camera system was mounted to a concrete block at the bottom of the Giant Kelp Forest exhibit for testing.

“This installation exemplifies Birch Aquarium’s strong relationship with Scripps Institution of Oceanography,” said Harry Helling, executive director of Birch Aquarium. “The aquarium supports scientists with design and prototyping equipment for use in the field, which helps us all of us understand and protect our planet.”

Through this research, Scripps Oceanography scientists will also gain a better understanding of the effectiveness of Marine Protected Areas. The acoustic-camera system is a conservation tool that will allow scientists to quantify diversity — and changes in diversity — in protected areas like Matlahuayl State Marine Reserve in La Jolla.

Birch Aquarium’s Giant Kelp Forest exhibit is open for viewing year-round. Every Tuesday, Thursday, Saturday, and Sunday divers enter the exhibit for the Kelp Forest Dive Show where visitors can see them feed the animals.

Listen to KPBS’ interview with Ana Širović from the Marine Bioacoustics Lab at Scripps Institution of Oceanography: What Sound Does A Fish Make? Scripps Scientist Wants To Know