Endangered Species In the Spotlight at Birch Aquarium

On this Endangered Species Day, we’re highlighting some of the vulnerable and endangered animals here at Birch Aquarium and what we can do to protect them.

Unfortunately, human actions are causing species to disappear at an alarming rate — it’s estimated that over 850 species have become extinct over the last 500 years alone. Therefore it’s essential, now more than ever, to identify species currently at risk of extinction and what we can do to prevent this from continuing.

It’s extremely important to remember that to be endangered does not mean there’s no hope! By raising awareness about species facing extinction, we can take action and find ways to aid conservation efforts that protect populations.

What is Endangered Species Day?

Enacted in 1973, the ESA is one of the most effective conservation laws in the United States. The law protects endangered species — those in danger of going extinct throughout all or a significant part of their range — by making it illegal to import, export, take, possess, sell, or transport them as well as prevents destruction of critical habitats that support endangered species. To date, it’s estimated that the ESA has prevented the extinction of 99% of the species it protects — which is currently over 2,140 species.

How do I know if a species is endangered?

The International Union for Conservation of Nature (IUCN) Red List of Threatened Species is the largest list of worldwide conservation statuses for plant and animal species. To create this list scientists and policy makers collect and analyze information about a species’ geographic range, current population size, and population growth patterns. The IUCN list ranks species in one of nine different categories depending on their risk of going extinct. These nine categories include:

What endangered species can you find at Birch Aquarium?

This Endangered Species Day, we wanted to introduce you to some vulnerable, threatened and endangered species found at  Birch Aquarium. 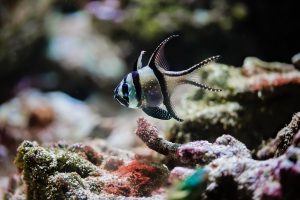 Banggai Cardinalfish may be small but these fish are hard to miss! These tropical fish are decked out with several dazzling characteristics but their coloration is perhaps their most impressive feature. Banggai Cardinalfish are a shimmery yellow-gray color striped with bold black bands and speckled all over with spectacular silver spots.

Unfortunately the incredible appearance of the Banggai Cardinalfish sometimes gets them in trouble — they have become a common target of illegal aquarium trade. Taking large numbers of these fish from their habitats in the Bangaii Archipelago in Indonesia decreases wild populations and leaves less wild fish available to mate. As a result Banggai Cardinalfish are currently classified as near threatened under the Endangered Species Act.

Another major threat these fish face is destruction of their shallow-water habitats like coral reefs and seagrass beds. One of the methods fishers use when capturing Banggai Cardinalfish for aquarium trade is a highly destructive tactic known as blast fishing. This method is illegal worldwide and involves using explosives to send shock-waves through the water to stun fish so they can easily be collected. Besides depleting wild populations of reef fish, this method also destroys coral reef habitat that Banggai Cardinalfish call home.

Without coral reefs, Banggai Cardinalfish have no refuge from predators or source of food — they commonly eat small crustaceans that also live on coral reefs.

You can find Bangaii Cardinalfish swimming in our Research in Action: 100 Island Challenge habitat in Hall of Fishes! 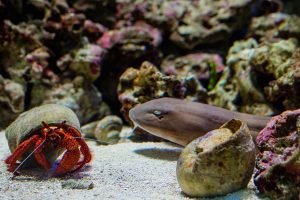 A shark in a tidepool is probably one of the last things you might ever expect … but believe it or not, Bamboo Sharks call the shallow intertidal region home! These sharks are adapted to survive in a variety of shallow water habitats including tidepools, coral reefs, and mangroves. They act as important predators in each of these ecosystems and cruise the seafloor snacking on small bottom-dwelling marine animals like fishes, crabs, worms, shrimp, and even squid. Despite their predatory status, Bamboo Sharks are relatively small in the shark world —  they only get up to about 3 feet in length.

Unfortunately, Bamboo Sharks are in trouble as several species have been listed as near threatened by the IUCN. Like Banggai Cardinalfish, while Bamboo Sharks aren’t technically endangered, the near threatened status means they’re at a high risk of ending up that way. That means it’s extremely important to implement conservation policies immediately to preserve the population levels of Bamboo Sharks.

Bamboo Sharks face a number of challenges in the wild — rising levels of tourism, pollution, and coastal development are all factors that have led to the demise of crucial Bamboo Shark habitat. However, there is hope!

Today, several small-scale efforts are in effect to recover Bamboo Shark populations. In the Gulf of Thailand fisheries researchers are using SCUBA diving to bring baskets of young Bamboo Sharks to the seafloor where they release them in an effort to restore wild populations. These young sharks are hatched from eggs in captivity and raised until old and large enough to hold their own in the wild. Divers bring these sharks to the ocean floor specifically to reduce their chance of being eaten by larger predators that attack their prey from below. Read more about Bamboo Shark conservation efforts here.

There is still lots of work to be done in terms of preventing Bamboo Shark population declines. While population recovery efforts are a great start, we must also protect crucial Bamboo Shark habitat to prevent further population losses.

If you hadn’t heard about the other two species discussed above — you’ve likely heard of the Loggerhead Sea Turtle! These charismatic creatures have quite the lovable reputation in the ocean world —  however they are also subject to a variety of human threats making this species in danger of extinction.

Loggerhead Sea Turtles are incredible long-distance swimmers and spend the majority of their life cruising in the open ocean. It’s estimated that they can swim hundreds to thousands of miles from their foraging grounds to their nesting beaches! But these turtles face many challenges as they swim across the ocean —  one of the most common is being entangled in fishing gear.

Unfortunately, many Loggerhead Sea Turtles swim and become entangled within large nets designed to capture schools of fish. Some are unable to surface to breathe air and are unable to survive. Sea turtles have also been known to get stuck on fishing hooks that they attempted to steal bait or fish off of.

Loggerhead Sea Turtles are slow growing and do not reach maturity until they are about 35 years old. Therefore they’re especially vulnerable to a variety of human-caused threats that they encounter before they can reproduce.

Loggerheads are unique in that they return to the same beach they were born at to breed and lay their own eggs. Unfortunately this incredible behavior can spell major trouble for these turtles when their nesting beaches are put at risk. Many of these beaches have been damaged by coastal development or pollution, therefore females are unable to find suitable habitat to lay their eggs. This means the next generation of sea turtles are not as likely to survive.

So how do we protect these lovable loggerheads?

Protecting regions of the ocean where loggerheads frequent has helped to increase their survival by reducing encounters with fishing nets. Many fisheries have adapted innovative techniques to avoid loggerhead bycatch as well. For instance some fisheries have employed Turtle Exclusion Devices (TEDs) that function as a trap-door to release turtles from large fishing nets. Fishers have also shifted to using specially shaped fishing hooks that loggerheads don’t get stuck on — greatly reducing the amount of loggerheads captured by longline fisheries.

Protecting nesting sites is a key component of loggerhead conservation efforts. These efforts include supporting Marine Protected Areas and reserves that encompass sea turtle nesting beaches, participating in a nesting beach cleanups, and advocating for dark beaches during sea turtle nesting season. It’s also especially important to maintain a safe and respectful distance if you ever encounter a sea turtle in the wild!

You can learn more about our very own residential Loggerhead Sea Turtle and her incredible story the next time you visit Birch Aquarium.