Home » Uncategorized » The Story Behind the Spot

The Story Behind the Spot

The Story Behind the Spot

Have you had the chance to visit our nursery habitats in Hall of Fishes recently?! This is where you can find our juvenile California Two-Spot Octopus. Right now this baby octopus is pretty tiny – it’s only about the size of a quarter! However, this species of octopus can get upwards of 2 to 3 feet. 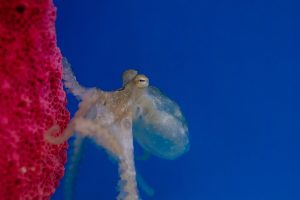 Wonder why it’s called a California Two-Spot Octopus?! This local species can be found along the waters of the West Coast from Northern California to Baja California, Mexico. It also has a bright blue “eyespot” on each side of its head. This cool adaptation tricks predators and prey alike into thinking it’s a real eye. It also makes this octopus appear bigger and helps ward off potential predators like sea lions, seals, and CA Moray Eels! But this spot is not the only incredible adaptation of this octopus.

All eight arms are covered in suction cups! This important adaption allows an octopus to move with ease, grip almost any surface, and even help to smell, taste, and sense its surroundings. But that’s not all! Suction cups especially come in handy when it’s time to catch their next meal. They typically hunt at night and will use their arms and suction cups to capture a variety of prey such as hermit crabs, snails, and even small fish.

This incredible invertebrate is a also master of disguise so it may take a while to find this octopus hiding among its habitat.  Octopus use chromatophores, a type of skin cell that makes color, to change color and texture to help blend into their surroundings! Want to see these chromatophores in action?! Check out the video below to see our baby octopus in action.