Scripps Oceanography researchers are using underwater microphones to understand the calls of the largest animal to ever live on Earth, Blue Whales. These colossal behemoths visit Southern California’s waters each summer, and what they are saying has remained a mystery until now.

To better understand the calls, Scripps researchers undertook the most extensive analysis of Southern California’s Blue Whale behavior and calling to date. Between 2002 and 2016 researchers recorded and analyzed more than 4,500 sounds from Blue Whales that were tagged with underwater microphones. 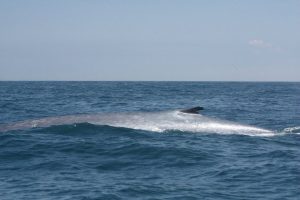 Blue Whales produce calls and songs at a frequency so low that it can’t be heard by the human ear. Their calls must be sped up to be heard.

Lead researcher Ana Širović and her team found that Blue Whales call or sing differently depending on the time of day and ocean conditions: 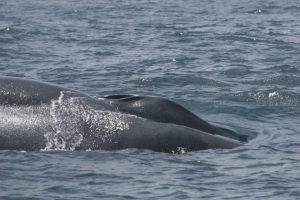 Take a deep breath! Like all baleen whales, Blue Whales’ blowholes have two nostrils. Theirs can each reach up to 20 inches in length!

Blue Whales are an endangered species and this important research allows scientists to gain a better understanding of their population and recovery from past whaling. Learn more about Blue Whales on your next aquarium visit in our Voices of the Sea exhibit now located in the Expedition at Sea: R/V Sally Ride Gallery.